This Day in History: Inauguration of St. Isaac’s Cathedral

During my time in St. Petersburg so far, I have walked past St. Isaac’s Cathedral and been quietly impressed with it more times than I can say. However, I never took the time to find out about the history of it, but the 249th anniversary of its inauguration today has given me a great opportunity to do just that. 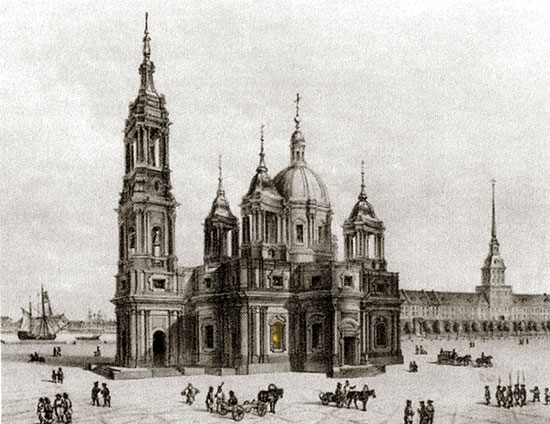 The St. Isaac’s which was inaugurated in 1768 is not the cathedral you see today, but was the third cathedral dedicated to St. Isaac to stand on that spot. The construction of the third version was dragged out and then the result was dissatisfying due to its clumsiness and simplicity in comparison to the grandeur of Petersburg architecture, so the question of re-building it arose quickly. Alexander I finally ordered its re-construction to celebrate his victory over Napoleon. The modern cathedral is the largest Russian Orthodox cathedral in St. Petersburg, and the fourth largest in the world.  The French-born architect Auguste de Montferrand was put in charge of its completion, although he was initially criticised for the design, which was seen as unimpressive and repetitive.

The cathedral took forty years to construct, from 1818 to 1858. During the Soviet period, the religious decoration of the building was taken down and it became the Museum of the History of Religion and Atheism, later the Museum of the Cathedral. During World War II, the dome was painted grey to help it blend in better and to avoid the attention of enemy aircraft, but it suffered heavy damage regardless – bullet holes on the south-facing columns remain. In the skylight was placed an intersection point to determine the position of German artillery batteries and exhibits were brought from museums in the surrounding area to be kept there. Restoration works were carried out in the 1950s and 60s, during which the viewing platform at the top was built. Since the end of the Soviet era, the museum has been removed and now regular services and major ecclestiastical occasions take place.

So pay St. Isaac’s a birthday visit this weekend, especially as with an ISIC card from Liden & Denz you get 40% off the price of entrance!

This post was written by Claire, currently studying at Liden & Denz.

Hello! I'm Claire and I’ll be interning at Liden & Denz St. Petersburg until the end of August, exploring my love of travel, culture and food.