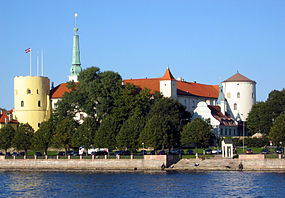 Latvia may never have been a mighty kingdom, but there are plenty of ancient fortresses and stunning palaces to visit, with hundreds of different locations still standing! In each Latvian parish and town there’s at least one beautiful manor house or medieval knight’s castle with its own history, unique architecture and heritage.

The first castles were built over a thousand years ago, but most of the ones built before the 16th century have since crumbled with age and the oldest is now Riga castle, which still serves as the residence of the President of Latvia. Found on the banks of the River Daugava, the castle was originally built in 1330 but has been reconstructed over the years in order to preserve it. Tragically, last year there was a large fire in Riga Castle, which totally destroyed the roof and several of the rooms, meaning you can’t visit parts

of the castle until they’re repaired but it’s still worth a look!

Many manors have survived and retain their spendour, and with a castle everywhere you turn, you’ll be spoilt for choice! Many of the castles are now hotels or spas, where you can enjoy an aristocratic meal or spa treatments as a break from studying Russian!

"There is life in Russia!" - one of our offline st

Ferdinand from Switzerland have been studying Russ

About 2weeks ago we published a post about New yea

Have you ever found yourself missing being able to

Dear Friends!  Wishing you and your families a f

Have you ever found yourself missing being able to

Russia’s most popular holiday is just around the

ONE VERB, MANY NUANCES. The verb слушать