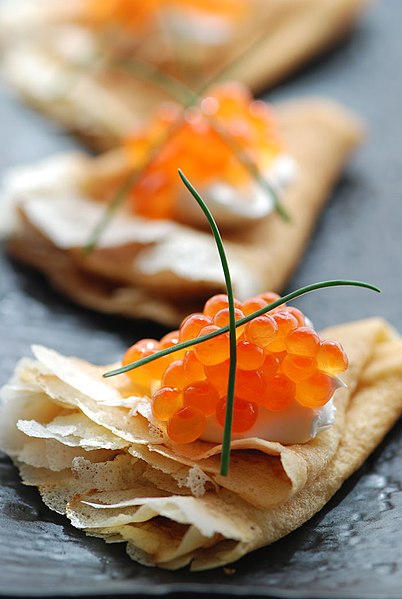 In case you haven’t noticed, this week is Maslenitsa (Ма́сленица)!

This is a week long event, starting this year on the 24th of February and ending this Sunday, the 2nd of March, in which the most important part is to eat as many blini (блины) as possible! Maslenitsa is essentially a week long Pancake Day, and is part of the preparations for Lent. In Orthodox Christianity, people are supposed to give up all animal-based foods (think milk, butter, meat, eggs, etc) as well as alcohol, swearing and bad thoughts in general! Sounds tricky and it definitely is, which is why Russians spend a week eating as many blini as possible to make up for forty days without animal products!

Maslenitsa also has pagan roots, and is the festival to celebrate the end of winter. You’ll have noticed that the days are much longer and brighter now than in the winter, even than just a few weeks ago! To celebrate this, people eat (you guessed it!) blini because they’re round and yellow and represent the sun!

There’s lots happening in St Petersburg this weekend, including the fourth annual International Festival of Traditional Culture, which takes place on Yelagin Island at the Kirov Central Park of Culture. The program will last from 11am to 7pm on both Saturday and Sunday and features folk music, dancing and an international crafts fair!

At the Babushkina Park of Culture there’ll be celebrations on both Saturday and Sunday and last from 1pm to 6pm, including a fire show and the launching of Chinese paper lanterns on the 2nd of March.

On Sunday, the last day of Maslenitsa, when we’re all stuffed full of blini, human shaped effigies are set on fire to symbolise the end of winter, and this year at Pskov, just outside St Petersburg, there’ll be a ten foot tall effigy that will probably burn all night long!

If you don’t want to head that far out, then make sure you go to one of the larger parks on Sunday to join in the fun! But above all, make sure you eat as many blini as humanly possible!

view image view more
Lucky Statues About Town
You’ll have spotted many statues around town, but did you know that some of these can bring you luck? If you want some money or success in ...
view image view more
Danilovsky Moscow market: around the world in 80 minutes
On the weekend I became very hungry for homemade Uzbek Plov. At home in Germany it goes at least once a week on the lunch table and accordingly ...
view image view more
My St. Petersburg
Paulo Renato Souza Cunha is a Brazilian student currently studying Russian at Liden & Denz St. Petersburg. He has something extraordinary to ...
view image view more
Aurora Theater
If you’re looking for something to do on a weekend in Saint Petersburg, then why not check out the city’s unique movie scene? The ...
Destinations:
Russian courses:
Internships:
About Us:
Get in touch with us:
Liden & Denz St.Petersburg
Ulitsa Zhukovskogo 3, 4th floor,
191014 St. Petersburg,
Russian Federation
Liden & Denz Moscow
Gruzinsky per. 3-181,
123056 Moscow,
Russian Federation
Liden & Denz Irkutsk
Gryaznova ulitsa 1,
664003 Irkutsk,
Russian Federation
Liden & Denz Riga
Raina Bulv. 31-5/6,
LV-1050 Riga,
Latvia
© Liden & Denz 2020
Email: bookings@lidenz.ru
This website uses cookies in order to offer you the most relevant information. Please accept cookies for optimal performance.Yes, I accept Cookies.