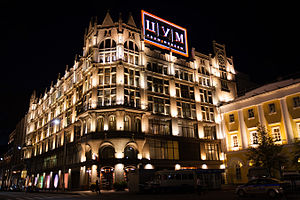 There’s a joke in Moscow: Quickest way to become a millionaire? Start as a billionaire and then spend a couple of weeks in Moscow.

Shopping in Moscow can only be described as an incredible experience, as Russia’s capital is home to caviar for breakfast, shops that Tolstoy himself visited and glitz and glamour at every turn.

There are bargains to be found, of course, but when struck by the city’s wealth and variety of shops, bargains tend to be the last thing on your mind as you peruse the glitzy stores!

The Moscow shopping scene is often considered outrageous, with magnificent stores one after another and shops ranging from those selling Bentleys to diamonds.

On Petrovka Boulevard you can purchase every single glittery item you could possibly think of: diamond jewellery, fur, gold leaf antiques, sable coats…

If you’re after European products you should head over to TsUM, a mall next to the Bolshoi Theatre, which stocks trendy Harrods like stores with perfume and jewellery along with Russian caviar and fancy foods.

Eliseevsky is the best place to go for classic Russian chocolates, and is worth a visit as it was mentioned in Anna Karenina by Tolstoy, for its crystal chandeliers and decorations.

For a market experience, find Izmailovsky Market located near the estate where Peter the Great grew up. It’s a flee market, with sellers who will happily negotiate prices, offering matroyshka dolls, linen, fur hats, amber and other essential souvenirs!

Another market worth a look is the Tsvetnoy Central Market on Tsvetnoy Boulevard, as it’s a huge, modern building that has won several design awards. Inside you’ll find up and coming young fashion designers selling their vintage and underground labels as well as cutting edge designers. Don’t stop at the fashion though, as on the fifth floor is an organic farmer’s market and on the seventh you can enjoy the foods you bought while taking in the spectacular panoramic views of the city.

This week, we got in touch with online student Tay

As if getting to grips with the cyrillic alphabet

🎙️What is your name and where are you from?

THE ADVANTAGES OF LEARNING RUSSIAN ONLINE. . Our s

Liden & Denz is very proud to have hosted, jointly