With the Winter Olympic games starting in Sochi on Friday, the Olympic torch can see the end goal in sight after 123 days in transit, touring the country.

On the 1st February, the organisers announced that the torch was carried to the top of Mt. Elbrus, Europe’s highest peak, in October, so as to avoid the worst of the winter weather that would have made such a feat impossible.

As one of the four “special projects” of the torch relay, two local climbers, Karina Mezova and Abdul-Khakim Elmezov, carried the torch to the summit of Mt. Elbrus in the Caucasus Range, where it was then lit.

Impressively, this feat was kept secret for four months as organisers wanted to save the announcement for when the torch officially visited the region.

One of the other “special projects” involved the Olympic Torch being sent into space for the first time in its history, aptly named “Space”. The torch has also visited the North Pole and the Baikal Lake in its journey to Sochi.

The games commence on the 7th February and finish on the 23rd.

You can read all about the torch relay here: 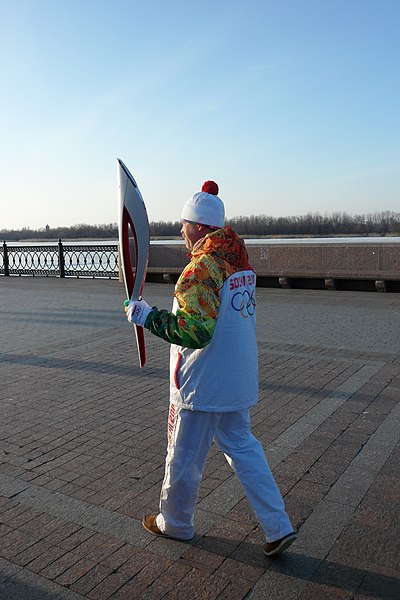 Our students in St. Petersburg took advantage of t

We have a new interview with one of our students.

We are now on TikTok! Follow us over there for sho

This is Russia, too! Snowboarding in May, hiking d

view image view more
Manifesta 10 in Saint Petersburg, where East and West unite.
As if its world-topping permanent exhibition hadn’t been enough, this year the Hermitage is showing off an authentic pearl among his ...
view image view more
How to Talk about Emotions in Russian
Despite all evidence to the contrary, it is, in fact, summer in St. Petersburg. Even though it’s been largely cold and rainy since my arrival in ...
view image view more
Moscow Coffee Festival
Moscow Coffee Festival “Coffee is the common man’s gold, and like gold, it brings to every person the feeling of luxury and nobility”– ...
view image view more
The Era of Art in Russia – Erarta
Erarta is the largest private museum of contemporary art in Russia and it collects artworks of talented artists from over 20 regions of Russia. ...
Destinations:
Russian courses:
Internships:
About Us:
Get in touch with us:
Liden & Denz St.Petersburg
Ulitsa Zhukovskogo 3, 4th floor,
191014 St. Petersburg,
Russian Federation
Liden & Denz Moscow
Gruzinsky per. 3-181,
123056 Moscow,
Russian Federation
Liden & Denz Irkutsk
Gryaznova ulitsa 1,
664003 Irkutsk,
Russian Federation
Liden & Denz Riga
Raina Bulv. 31-5/6,
LV-1050 Riga,
Latvia
© Liden & Denz 2021
Email: [email protected]